Happy Labor Day, celebrated in the United States on the first Monday of each September, is the nation’s official commemoration of its workers’ contributions to national strength, prosperity and well-being. It also marks for millions of Americans the unofficial end of summer.

America’s labor force is 154.4 million people strong, or about two-thirds of the working-age population. Men make up slightly more than half (53 percent) of all workers, according to the Department of Labor. About 12 percent of workers belong to a union. 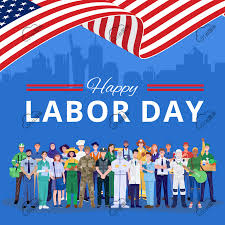 The exact origins of Labor Day are unknown, but scholars typically credit either of two labor union officials — Peter J. McGuire of the national carpenters’ union or Matthew Maguire of a machinists’ local in Paterson, New Jersey — with the idea.

The first Labor Day was celebrated in New York City on September 5, 1882. The date apparently was chosen because it was about halfway between the July 4 Independence Day holiday and Thanksgiving (which falls in November). The occasion was marked by a parade sponsored by the Knights of Labor, an early U.S. labor organization, and about 10,000 workers marched.

The next day’s New York Times reported that “Those who rode or marched in the procession were cheerful, and evidently highly gratified with the display. … The great majority smoked cigars, and all seemed bent upon having a good time at the picnic grounds.” Banners called for “Eight Hours for a Legal Day’s Work” and “Less Hours and More Pay.”

The Knights adopted a resolution calling for recognition of the first Monday of September as Labor Day. By 1894, some 28 states celebrated Labor Day and in that year Congress adopted legislation establishing the legal holiday.

GM Hairpiece,Our company has offices in California and New York in the United States, so we recruit employees from different countries to provide them with a stable income, do not require them to work overtime, strictly in accordance with all the holiday system for rest, let them work at the same time, enjoy life, our company specializes in selling and wholesale men's wigs, women's wigs and HAIR WEFT and other products, our company will donate to local charities every year, every time a product is sold, it will donate a dollar to African children, Help more people to live better, this is also the goal of our company, if you are interested in our products, please contact us in time, we have off big discount ,all of the hair system up to $400 get $60 off,thank you very much。